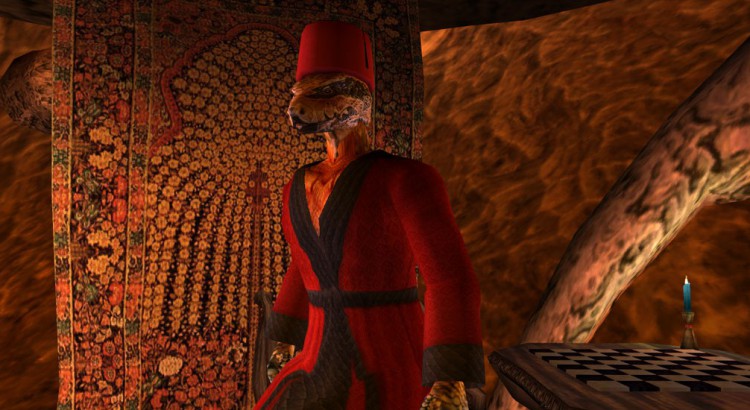 This week I’ve been working on the new Uvirith’s Legacy Website, using it as an opportunity to better get to know WordPress because I have a lot of content for that site ready to go. I’m quite impressed by the Ignite theme, and may switch to it for this site as well—we’ll see. I’m also using a different slide-show plug-in that has touch responsive options, and may switch over my galleries here. It’s been quite an undertaking because I’m editing the content as I convert it into the new format. One thing I wasn’t as good at, half-a-decade ago when I wrote most of it, was brevity. No wonder people asked some of the same questions over and over. It’s not like what I’d written was crystal clear. Hopefully it is now (it’s certainly more searchable in this format). Though there’s still enough information to fill a book. It’s a big mod.

The next bit is TL;DR, but it’s maybe worth a laugh:

So the night before last (I’m editing this stub on Monday), I decided to do a speed-run through the mod to take better screen-shots. I was up all night (because I never do anything in moderation). Anyway, that’s how it started, but by next-evening the sleep deprivation kicked in, and I started getting silly. See, I went into this easter-egg area where you get beaten up by Upholsterers Guild thugs because they think you’re a member of the Carpet Layers Guild, but really you just wanted to fill out form 11b to reschedule your rug laying because you’re sick of the Two Argonian Guys waking you up in the middle of the night with their Three Stooges antics, and you thought the note on the door that said “Beware the Man Eating Tiger!” was just a ruse, but there really was a tiger and a dude named The Great Zanini and they tied me up and beat me before the two argonians crashed through the ceiling and—deep breath—then I went and raided their guild, where there’s a couple stoned cronies and a bunch of slaves making tapestries for Gaius Verres, and one of them is wearing this Dangerous Red Dress and a pair of hot heels, so I take them (yes, I made all this shit myself—while also sleep deprived).

Ok, so I have the heels and the dress, and a riding crop from my torture chamber (yes, you get your own torture chamber—I like to pretend it came with the guard’s health plan because their union demanded chiropractic therapy). I also have a stupid red pointy hat with Wizzard emblazoned in big gold letters, from my mod Rincewind’s Luggage. So I put it all on my high elf who looks sort of like Pamela Anderson, and she looks amazingly dumb, and I start running around with this riding crop pretending to hit the off-duty prison guards who are half-undressed in the barracks. While I’m taking screenshots of this ridiculousness, Gavin comes home from work and I explain how much of a total dork I am.

Anyway, one of the last things I did was the quest where you capture an invading Wizard and throw him in your prison. Now, I’d added in cross-compatibility with one of my more comical mods Get Fezzed! so he would complain if you made him don a humiliating dinky fez. If you’ve already worn him down (to get him to tell you his secret plans) by making him wear the helmet that makes scary ghost noises for a few days until he’s completely bonkers (it’s PG-rated torture), then you can make him do a little monkey dance while he’s wearing the fez. So, I loaded the fez mod, and while I was at it I loaded Myron Reducto’s Shrinkwand (another of my stupid mods) as well. Also, putting on the Accursed Fez, which imbues you with the power of Fezzing, makes you go bald with it on due to me not bothering to work around the crappy ancient game engine replacing hair with helms because it’s funnier that way.

So here I am trying to get this wizard, who I made to look sort of like The Monarch from Venture Bros., to do his little monkey dance. Unfortunately, the animation I used was kind of buggy and he only shuffled in one direction, because it was only made for like five seconds worth of entertainment, and he keeps budging into one corner. He budges so far into the corner that when I want to unshrink him I can’t target him without opening the cage, so I decided to turn clipping off and go through the bars—except it turned clipping off for him as well and he shuffled right through the wall. I start taking screenshots like crazy now because this is hilarious, watching him dance all the way out of the cell and into the black void beyond. We both turned red because only the ambient light hit us out there and it is RED. It was like being in hell, and that creepy little dude looked just like a cartoon devil—wearing a tiny fez. I tried to float around him to get him to dance on my shoulder like a creepy little homunculus because he was Fun Sized, but the shot I got was kind of disappointing.

Once I got bored with that, I shut it down and went through my screenshots folder, and found I’d forgotten to delete the previous session after deleting the crap shots and packing the rest into a compressed file—so, I ended up with my crazy shots interspersed with a bunch of other stuff. I had shots of the dungeon run where you have to fight hundreds of fire-spewing beetles, including a giant one that shoots you from across a chasm filled with tons of regular-sized ones writhing below, so if you fall down there they hit you so fast they can eat you alive before you’ve fired a single frostball, and all this is done in almost pitch darkness. It was also interspersed with a battle with the Lichlord Uvirith, wearing Henry VIII’s famous doublet textured over a tattered robe, and it had the bit where he summons an entire room full of undead because he is pissed. It also had shots of the teenaged maid caught giggling at the young apprentice and looking embarrassed afterwards, and of the stove fire caused by the orc bartender leaving it unattended, and pictures of the Two Argonian Guys—and all this also interspersed with the beetle battle because I did two runs (due to a crash). The screenshots rolled on into the hundreds: vanity shots of my character in a cephalopod-helm wielding a staff with a skull on the end, pictures of a bed piled with all the decorative pillows from the Upholsterer’s Guild, pictures of a girl battling a giant mudcrab in the Vivec Arena interspersed with the entire Mages Guild donning tiny fezzes, a single picture of the dude I stuffed naked down a hole because he’s just a “talker” that you need to turn clipping off to even find, pictures of the tamed nix-hounds killing random encounters in the dungeon, pictures of the entire Telvanni Council fezzed and shrunk according seating order, pictures of the wizard battle where you summon a tiny orgim named Cartman, pictures of me shrinking and fezzing the prison warden for shits and giggles, and then the last bit of weirdness from the previous paragraph.

Flipping through this slideshow, of nearly 650 images, was like a David Lynch movie. I decided to package the whole thing up in a file called The Weirdness and save it for another day. I’m not going to make a whole WordPress slideshow because it would take forever to load, and you just wouldn’t get the same surreal effect with only ten slides, but I’ll leave you with this:

One thought to “Mucking About”