There are at least two kinds of mastery in any art you care to name. The most recognized form is virtuosity, because it’s easy to quantify. You can follow a musical score to check if a performer is playing all the right notes and in the right time. The second is having a honed intuition, which is harder to capture. Knowing what notes to play is simpler than knowing how to play them. Its simpler than knowing what notes not to play. It’s safer than flaunting the score.

In ages past, virtuosity was elevated because it represented the heights human effort could obtain. Now that machines can perform with absolute precision, a human doing the same is considered robotic. You can train your muscle memory to play Flight of the Bumblebee in double time, or follow the Save the Cat formula to write a screenplay that hits all the right story beats, and still make people yawn. Virtuosity alone is not enough to be engaging. People now look for the human element, which allows for mistakes. In fact, you don’t even need to be that good to be great, much to the chagrin of anyone who’s mastered their craft and been ignored.

I’ve come to think of virtuosity as another plateau on Mastery Mountain, one near the peak. The over-competency trap is so dangerous because it’s almost indistinguishable from greatness. After all, if you’ve mastered the perfect formula to create art that wows the public and critics alike and gives you a steady paycheck, why change at all? It’s not like figuring out the formula to write an A+ undergrad essay, only to move into the real world and have people tell you your writing is undergrad garbage and you only got those grades because the curve was so low. When the whole world tells you you’re amazing, it’s easier to think you have nowhere left to go.

END_OF_DOCUMENT_TOKEN_TO_BE_REPLACED

There’s a pattern I’ve noticed in failed movies trying to make the next Harry Potter out of a book series that had reasonable sales. They’re usually big budget, with tons of gorgeous CGI and special effects, and hit the box office like a cold lump of lead. There are a lot factors, I’m sure, in what makes a movie box-office poison, but the biggest one in fantasy movies, particularly those aimed at kids, is this: a missing sense of fun.

Now, I say fun because “sense of wonder” is what all those films are going for. The problem is a “sense of wonder” isn’t enough if the movie’s a dreary slog. Perhaps it was back in the 80s, when The Neverending Story captured a whole generation’s imagination despite being incredibly depressing. What I’m saying is vicariously getting to ride Falcor the Luck Dragon made up for watching a horse drown in the mud.

The Neverending Story eventually got a sequel, but much like part 2 of the book, it was a hundred times more unpleasant and deservedly tanked. All I’ll say about the second half of the book is it lives up to its title because no one’s ever finished it. Most films following the The Neverending Story format never get a sequel these days. After all, who wants to waste their time watching a humorless hero go through a thankless quest just to see a unicorn when there’s more enjoyable fantasy fare out there?

END_OF_DOCUMENT_TOKEN_TO_BE_REPLACED

Seriously though, the term “Selling Out” has been abused by hipsters and douchebags for so long, using it now flags you as one, like the words “sky wizard” or “crotch spawn” or “sheeple.” Yet while trying to figure out that point where something you like becomes a souless mockery of itself, I found no other term as useful, so let’s unpack its baggage, shall we?

The term Sell Out has been characterized to mean the following:

END_OF_DOCUMENT_TOKEN_TO_BE_REPLACED

“Don’t judge a book by it’s cover.” Screw that. We all do, which is why you need to get your cover right. It’s the first thing people see. Before they figure out what your book is about, the cover has already made an impression. If that impression is boring, I don’t even let the title sink in. I’ve already gone on scanning, for a book that stands out and looks sexy.

So what makes a book cover uninteresting? How about rows and rows of samey shit. I don’t care if it’s as slick as a movie poster. If your cover is some Photoshopped stock model jobby with a dude on a horse, or a leather chick in the boob-butt pose, or some corseted lady swooning in Fabio’s arms, all your cover says to me is: “This is a McDonalds burger, just like every other McDonalds burger you’ve ever eaten.”

This is all some people want. I get that. I’m not here to denigrate that choice (much). I’m writing this for the authors who want to find success by standing out, not blending in. If you haven’t written the literary equivalent of a McDonalds burger, then holy crap do not package your book like a McDonalds burger. Avoid slick movie-poster covers, because everyone has one. Everyone but the trad pubs…

END_OF_DOCUMENT_TOKEN_TO_BE_REPLACED

“How do you handle feedback?” is a question I get asked from time to time. It’s one I’ve had trouble answering because taking criticism is something I manage well enough that I forget how delicate people can be. Weeks ago I took part in a podcast where feedback was a main topic. I felt afterwards that we kind of made a hash of it because our responses were basically, “Well, feedback is good, right? Right.” I’ve been trying to work out a more helpful answer ever since.

First, feedback is essential to creative growth, just as it is with biological evolution. Without the push-pull of outside forces, life wouldn’t have developed the complexity it has today because it wouldn’t need to. We’d still all be single-celled organisms swilling primordial soup – if that. Of course the process requires death and pain. It’s unavoidable, but beneficial. Just ask someone who can’t feel pain. They’ll tell you their life is a constant struggle not to maim themselves because their body won’t tell them when something’s wrong. For art, the same is true.

But how did I learn to take the pain? I suppose some personal history is in order. First day of art college: the pottery class all got to throw something on the wheel. Afterwards the teacher took a clay wire and sliced all their pots in half. Students whined. Because back in high school everything they made was a precious gem to take home to mommy. This shit, however, would not fly here. Students paid to learn, and that meant dissecting every pot until they stopped sucking.

A similar lesson was carried out in figure drawing class. Students spent days doing nothing but 30-second gesture drawings. They wouldn’t get a good long pose until they’d practiced getting the whole body down in as short a time as possible. This kept students from spending all their time drawing the model’s face, or boobs, or whatever – over focusing on details without grasping the bigger picture. It also taught another valuable lesson: not every stroke of the pen is sacred. It forced students to practice and get used to drawing endless reams of crap.

Every student had to learn how to critique and be critiqued, though these sessions were soft compared to some places online. It was a supportive environment where your work was regularly picked apart. And nearly every student (that didn’t drop out after first year) realized that criticism wasn’t personal. These people were trying to help (even if that help was misguided attempts to get students to stop painting realistically in favor of abstract expressionism because the instructor drank the Greenberg/Rosenberg Kool-aid).

So my answer to how I handle feedback is: training.

Of course finding ways to train your mental feedback forcefield can be difficult, especially if your only available resources are online, where trolls lurk around every corner. The answer isn’t finding some hugbox where criticism isn’t allowed, because these environments are toxic, poisoned by the egos of people who’ve devolved into the creative equivalent bacteria, endlessly eating their own shit and never evolving. To learn how to take criticism you have to seek it out, and that means putting your stuff out there. So what are some ways to ease into it?

END_OF_DOCUMENT_TOKEN_TO_BE_REPLACED

I’ve heard that great art comes from conviction so many times it’s become an internal mantra. It wasn’t until I properly reflected on the statement that I realized conviction is the wrong word. Making art well (and I’m including writing) is a matter of commitment, conviction be damned. Here’s what I mean:

END_OF_DOCUMENT_TOKEN_TO_BE_REPLACED 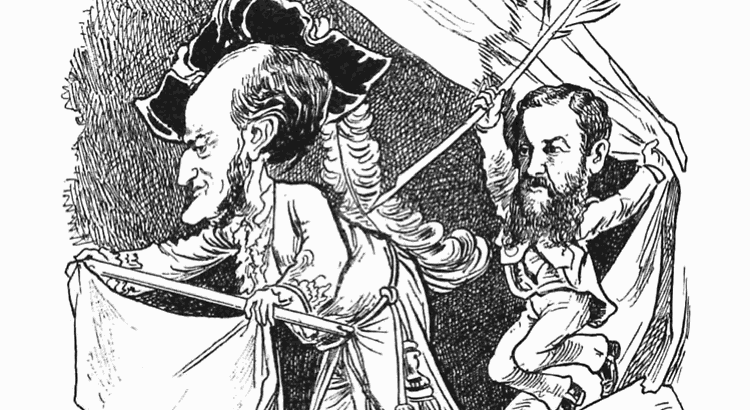 I’m currently reading Tolstoy’s scathing indictment of aestheticism in What is Art, his views of which are unpopular to this day because he pretty much hates everything. I’ve been taking notes, so I’ll have more to say on the whole book later. However, I have to share his crotchety-old-man rant about Wagner, because it is hilarious. Tolstoy describes attending a performance of The Ring of Niebelung in 1898 like it was a terrible fever-dream. Here’s his reaction to Act I in all its TL;DR glory:

END_OF_DOCUMENT_TOKEN_TO_BE_REPLACED

Books can be complicated, because they’re full of words and stuff. Apparently book words are not complicated enough to justify research grants though, so academics made up new words to describe what the words in books do. As a graduate of Fine Arts, I’m here to demystify some of their terminology so you can sound smart and stuff too.